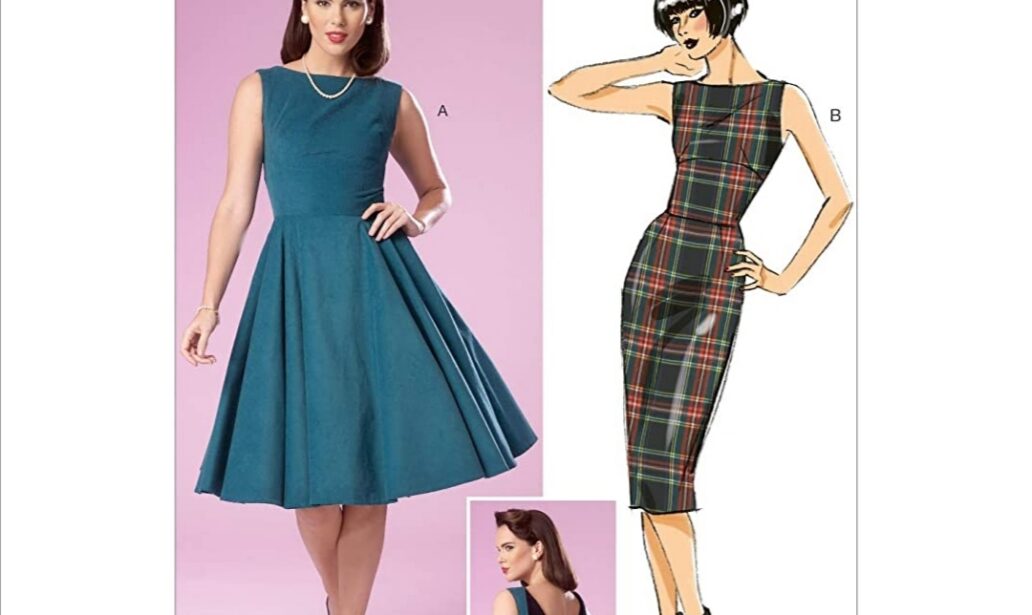 This was one of the first patterns I bought when I started sewing – I was watching the BBC adaptation of Agatha Christie’s Pale Horse (in other words, I was watching Rufus Sewell) when I saw a beautiful dress worn by Georgina Campbell (who plays Delphine). The feature that caught my eye was the fold back facing. After a pattern search, I found B6094 (a Patterns by Gertie) and it has been neatly filed away now since February.

Now, if you know me, you’ll know I”m not really into the big 4 patterns – I prefer indie pattern designers, mostly because I love the clarity of the instructions and the way in which they’re illustrated. However, Butterick really do have it down when it comes to the vintage 40s / 50s style I love so much, thanks to Gertie.

This pattern is rated as suitable for beginners but, back in February, I knew it didn’t really mean ‘beginner-beginner’ with a mere cursory glance so it has taken me until now to dig it out. While it is a straightforward dress with lots of familiar skills, it’s a bit laborious at first glance – a lining and a facing seems like overkill so I opted for just doing a facing since it was a toile but it will work perfectly well for the heavier versions I intend on making.

The toile version is made out of some shirting fabric I bought on a whim because I like the colours (of course, I had no idea what I would do with it) and the facing is made with a plain cotton. It isn’t exactly what the pattern is supposed to be in these fabrics but it creates the perfect floaty summer dress and it is a wearable toile. However, I cannot wait to make an autumn cord version (it’s a recommended fabric and it will definitely have so much more impact and structure).

Another part of the pattern I discarded was the petticoat – I don’t think it needs it – but I have plenty of RTW petticoats I can slip underneath if I ever fancy a bit more drama.

I think the full circle skirt could be changed for a gathered skirt and it would still look great.

There is a slight fitting annoyance with the midriff piece – it doesn’t line up quite right so it does take a wee bit of fussing to pin in place… I could also do with shortening it a little, too. Note for next time.

The feature I wanted was the back folds and they’re going to look so much better in a fabric suited to the pattern.

I don’t often make a practice run but I wanted to get it right before cutting into the cord – this is the beauty I’ll be using when I sew it up for real (not that I won’t wear the toile if the sun ever chooses to show itself again. Next time I’ll be making it from this beauty (and I’ll be adding the self covered buttons, too). It’ll probably have to be a couple of inches shorter in the cord as it’s not quite 60 inches wide but at 5 ft 1 (and a bit) I’m sure it won’t make too much of a difference. I’ll have to find a nice facing fabric, too!