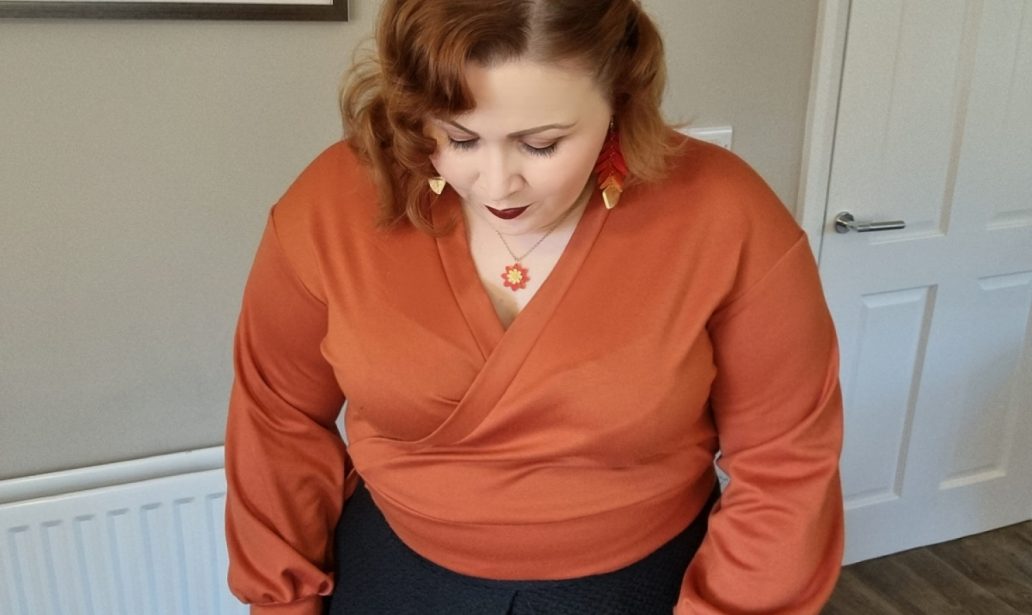 I have been in need of a plain black skirt in my wardrobe for ages; I really detest plain black, though, and tend to go for black fabrics which have a texture so when I saw this deadstock fabric, I thought it would be perfect for a Charm Patterns Stanwyck Skirt (the full circle version). Yes, I know; this fabric is a cotton stretch and the Stanwyck is intended for wovens but I figured, since the only part of the garment that is fitted is the waistband, I could get away with it if I stabilised it. I hit a snag, though, when I discovered this fabric waw quite narrow – I ordered 3m assuming, being a stretch fabric, is would be a minimum of 58”. That was the first lesson learned…

So, I scoured through the pattern stash and found the Brooklyn skirt by Seamwork which I printed off well over a year ago and had not yet got around to making it and discovered I had enough fabric to give it a go. This should have been a simple make; it is literally a half circle skirt with afront box pleat, invisible zipper and waistband. This fabric would accentuate the fullness, given its structure, which is a look I am so here for.

I stabilised the waistband pieces, twice, and sized down, thinking it would compensate for the slight stretch in the fabric — and it did. Before I put the zipper in, I check the fit of the waistband and it was spot on. Following sewing in the zip I followed the pattern instructions and top stitched around the whole waistband. And what do you think I discovered when I put the skirt on? It had stretched – and I am not talking by half an inch but almost FOUR INCHES…

The force of feeding the fabric through the machine – despite being doubly interfaced – distorted it to the extreme, which is odd, since the fabric itself had less stretch than something like a ponte roma (which I have used in a similar way in the past.

Now, I have never really bonded with my seam ripper – as I said, this is my first sewing fail, so we have never really got acquainted. The very thought of having to undo the entire skirt filled me with dread; I mean, the whole waistband had been topstitched and with the texture of this fabric, the stitches had all but disappeared. So, what did I do? You’ll be disgusted at me – I washed the skirt in a high heat and dried it in the high heat (risky, right?) but it did nothing – I had, of course, already prewashed it at 40 so all the shrinkage must have already been done.

Lazy method failing me, I did the only thing I could do. I mean, this skirt literally fell off me so it was totally unusable… I took the whole thing apart, pressed the pieces as much as I could (this fabric doesn’t really respond all that well to ironing, even on high heat with steam, so it took a long time to press the pleat in) and set about recutting the pieces, sizing down another two times.

I managed to put the whole thing back together and, this time, I didn’t even try top stitching the entire waistband; instead, I hand stitched the waistband in place to finish it – et voilà, one perfectly fitting skirt.

1 comments on “Seamwork Brooklyn Skirt: A Comedy of Errors”