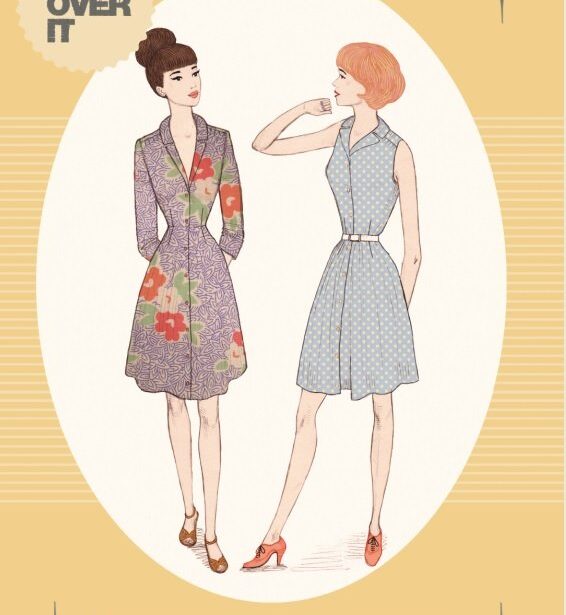 It’s no secret that I am a huge fan of Sew Over It Patterns – the Vintage Shirt Dress is no exception. Historically, shirt dresses and I don’t get on very well. The familiar (to many of us) gaping issue haunts me. I suppose that’s what took me so long in picking up a copy of this pattern – I’ve never considered a shirt dress a staple in my wardrobe and yet, there’s no reason why it shouldn’t be. I am a librarian, after all, and a shirt dress and a cardigan is a simple and chic work wear outfit. I don’t know whether it is because winter is coming in or maybe just because ever since I started garment making back in February I’ve been orienting towards colours and may just need a palette cleanser, but I really wanted to make a plain black version of this dress – I opted for a simple black cotton and I’m glad I did. I’ve been trying to make a few more basic staples as my wardrobe is a bit too loud in colour and prints to be considered ‘capsule’ in any way.

While the pattern is very modern, it does have a few vintage details (hence the name): it features gathered shoulder seams, a cute collar, bodice tucks as well as skirt pleats. The bodice half is vaguely reminiscent of 30’s/40’s blouses, whilst the fuller skirt has a bit of a 50’s vibe about it – the finished garment really is a lovely combination of these styles. The structure of the garment is what made me choose a simple black cotton fabric – it makes for nice crisp pleats and a sharp collar. It’s also easy to cut, easy to iron and easy to finish (and after my last few makes – that were velvet and tulle based – it was lovely to make something relatively straightforward). Even the button holes weren’t too much of a bother thanks to the structure of the cotton.

I was expecting the construction of the dress to be daunting, especially because I’ve made a collared garment once… However, it was relatively straight forward, owing mostly to the fact that Sew Over It are experts in writing clear and concise instructions; the illustrations are also particularly useful.  The one thing I would say, in regards to the collar, is to choose an interfacing depending on the weight of the fabric you are sewing with. Because I was sewing with a medium weight cotton, I decided to stick to a lightweight interfacing fabric, and it worked well; last thing I wanted was an overly rigid collar.

I decided to make the sleeveless version, rather than the sleeved version so that it would be as suitable to wear on its own in summer and layered during the colder months. This meant using bias binding to finish the sleeves (a process I don’t usually enjoy but was absolutely fine because cotton is just so easy to sew with).

This is a really satisfying make and even though I had little to no sewing-focused time this week, I managed to steal almost an hour every evening after work and before chores / dinner; so 4-5 hours was enough time to trace, cut and sew up this shirt dress. The only thing that kept me from finishing it before the weekend is that the post is so slow at the minute and it took longer than it usually would for the buttons to arrive so the dreaded part of the buttonholes kept being put off…

Turns out there was nothing to worry about as cotton is the easiest fabric to create buttonholes in – my apprehension was due to having worked with more fragile fabrics in the past.

I never imagined I would have to add length to a skirt (coming in at 5’1) but if I make this again, I’ll be adding a couple of inches. It is just a little shorter than my usual. It’s definitely a pattern I’ll revisit in the future; I can see a few block colours in my wardrobe.