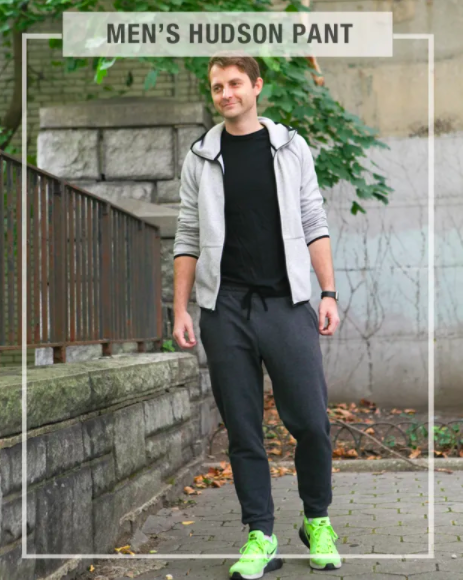 I have been trying to fill some of the gaps in Simon’s wardrobe and got to loungewear – the Hudson pant for men was one of the strongest contenders and it has received a seal of approval for fit and comfort.

The Hudson pants are modern in their fit; to fit waist sizes 28-42″, there’s a bit of room at the hips with a slightly dropped crotch area and they taper into a skinnier leg, ending with a cuff at the ankle. The waist is both elasticised with a drawstring.

Suggested fabrics include medium to heavy weight knits such as french terry, ponte, and sweatshirting; with autumn approaching, I opted for a cosier sweatshirting from Jenny Stitches.

The actual sewing was pretty simple; for inserting the pocket pieces I used a regular straight stitch but for all seams that needed stretch I used the lightning stitch. I opted to sew with my Quantum Stylist rather than my overlocker as I prefer pressing seams to avoid bulk, especially with thicker fabrics like this. I was amazed at how quickly they came together. I had to wait for 2″ elastic or they’d have been finished within the hour. In future, though, I will consider using less than 2″ wide elastic as it was super annoying getting it to sit straight while sewing over the waistband to make the elastic channel for the drawstring.

Size wise, I actually made no modifications, although I was tempted; the joggers are drafted for men 6ft tall and Simon is a couple of inches shy of that. My serious sewist head said to shorten them but I decided to go with my gut instinct instead. Eyeballing the pattern pieces, I thought they looked spot on – turns out I was right as the greatest critic decided they were just right the way they were.

I’ll definitely revisit these – and next time bear in mind that the cute pocket detail would look great in a contrasting colour. As would the ankle cuffs, for that matter.

I think these are going to get a lot of wear if the praise is anything to go by.

If you have never made menswear before this would be a great place to start – there are also versions for women and kids available, too.