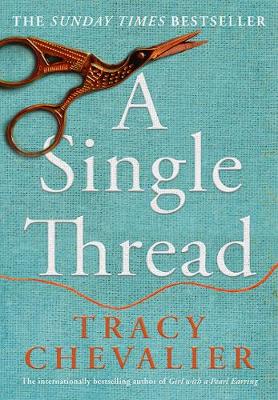 There is only one pasttime that I love more than sewing and that’s reading. Books have always been at the heart of my world – so much so that I went on to study literature at university to PhD level, following which I taught Renaissance Literature and Literary Theory in universities before going on to work as a librarian, where I seem to have found my calling. While this is a sewing blog, predominantly, I came to the realisation that I have read so many novels that feature sewing and fashion – and there are so many I have yet to read but that are currently taking up space on the to-read bookcase – that it wouldn’t be out of place to share my thoughts on these books on this blog. So, I’m starting with one that I’ve enjoyed recently; Tracy Chevalier’s ‘A Single Thread’.

Tracy Chevalier – probably best known for Girl With A Pearl Earring – has a remarkable talent for showcasing overlooked women, from the girl she imagines was the subject of Johannes Vermeer’s masterpiece to Violet Speedwell, the heroine of her latest novel, A Single Thread.

We join Violet – and England – amid the devastation caused by the First World War, during which 700,000 men were killed, including Violet’s fiancé and brother. Violet is a “surplus girl” – a phrase so weighted with disdain of women that it pains me to even use it.

“The superfluous women are a disaster to the human race.”

At the age of 38, Violet is single and has little chance of finding a husband. Violet belongs to a unique generation of women, who were “considered a tragedy, and a threat” but there is something familiar about these single women trying to pave out an independent path a century on: their financial struggles, the pity and suspicion of their married peers with children, and the judgment and fear of harm from men.

Violet has been living with her passive-aggressive mother until she decides one day that she can’t take this emotionally claustrophobic environment any longer and decides to move, taking a typist job at a small insurance firm in Winchester. Yet, this move comes at a cost as she leaves her overbearing mother in the care of her brother’s family:

The price of her happiness – no, not happiness; the price of her freedom – was the misery of at least four people. It was a very high price indeed, and Violet resented having to calculate it in this way. A man never did.

It is in Winchester that Violet finds her voice and her courage, standing up to her insipid boss by demanding a heater for the office and negotiating better wages when she has to take on the additional workload of a colleague who leaves to get married and become a mother.

Violet finds living on her own lonely so she joins a group of broderers – a group of women who embroider the kneelers and cushions for Winchester Cathedral, with a desire to leave their mark on the world in needle and thread for generations to come. The broderers are an interesting group of women, led by the kind but exacting stitch queen, Miss Louisa Pesel, and her less lovable assistant, Mrs. Biggins. Here, Violet forms friendships, some of which challenge the expected norms of society; Violet’s relationship with bookkeeper Gilda Hill and school teacher Dorothy Jordan finds her embroiled in scandal and gossip.

On a solo trek around the countryside, Violet is called upon to negotiate her feelings when she meets Arthur Knight, a bell ringer in a nearby cathedral, and develops an unconventional relationship. Yet, whatever her feelings for Arthur, as reminiscent of an Austenian narrative as they might well be, A Single Thread is not that kind of love story – it is more about a woman’s love for the peace of a cathedral and the order offered by religion in a world that has been filled with bloodshed and violence and is threatened once more by the rise of Hitler in Germany, a reality which proliferates the news throughout the novel.

Chevalier has delicately stitched plot and characters to create a convincing and detailed historical tapestry with attention on the women that history should never forget. The Winchester Cathedral borderers continue to work today – long may they continue.