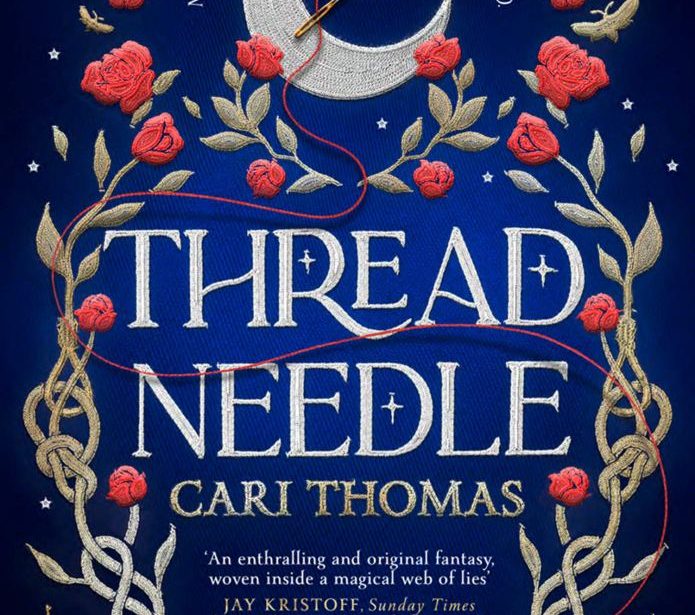 Within the boroughs of London, nestled among its streets, hides another city, filled with magic.

‘Magic and love. Love and magic. They destroy everything in the end …’

Anna’s Aunt has always warned her of the dangers of magic. Its twists. Its knots. Its deadly consequences.

Now Anna counts down the days to the ceremony that will bind her magic forever.

Until she meets Effie and Attis.

They open her eyes to a London she never knew existed. A shop that sells memories. A secret library where the librarian feeds off words. A club where revellers lose themselves in a haze of spells.

But as she is swept deeper into this world, Anna begins to wonder if her Aunt was right all along.

I’m not going to lie; I judged this book by its incredibly beautiful cover. When sewing is one of your favourite pastimes, it’s hard to resist a cover which features a needle and thread. That’s not to say it’s a book about sewing; it’s not. But the motif of stitching and embroidery runs throughout the book which is rather satisfying.

Thread Needle is a contemporary urban fantasy with witchcraft and elements of fairy-tale thrown into the mix. It is so well-crafted that it is impossible to put it down. The plot and the characters are equally as compelling as each other. I also found myself being drawn into this re-imagined magical London; it’s hard to resist a bit of fantasy but, for me, London is one of my favourite places so my imagination is easily captured when it is the setting of a story. That’s not to mention the magical library which Thomas creates under the British Library!

I was a little confused when I got started on this novel as to why it is listed as general fiction; there’s something about it that feels definitively ‘young adult’. For the most part, the story is set in a secondary school, following a young witch, Anna, as she discovers her magic, navigates friendships, falls in love for the first time, discovers family secrets, and suffers the abuse of her Aunt who became her parental figure when she was just a baby, following the tragic and violent death of her parents, an event which is shrouded in mystery. It gets to the heart of the complexities of being a female teenager; Anna’s story is told in such an authentic and raw way that it’s hard not to get thrown back in time and identify with these young characters.

That’s not to say it’s a light read; there is a real darkness in this story as Anna experiences abuse from her aunt and the cult like coven that dictates their life. The coldness and cruelty of Anna’s home life, where she is controlled, manipulated and hurt as a means of containing her magic is interrupted, however, by the arrival of Effie and Attis who introduce Anna to world where magic is not something to be quashed or repressed.

Effie and Attis draws Anna, along with two other students – Rowan and Manda, also witches – into their circle of magic. They start to meet to explore magic in the abandoned sewing room of the school, no less. The first object that features in the exploration of their magic is an old sewing machine. We explore this other London, a world filled with libraries made entirely of books, corridors of pages, leather volumes that listen and whisper and bleed; of emporiums half-hidden to the ‘cowan’ eye that sell fantasies and dreams and the memories trapped in photographs and other objects; of keys that can open any doors: of clubs that pulse with spells, and magic that can slow time and draw in the stars so that the London sky becomes magical.

But a darkness looms over London; there are whisperings of witches, sacrifice and rituals in the air, heralding strange and dark times to come; Anna, meanwhile, must decide to fight for her magic or have it bound by the Binders and lose it forever.

This is a really imaginative book and I was – pardon the pun – spellbound by its protagonist and prose. It is essentially a coming of story; aside from the magic and witchcraft, Anna is on a road to discovery, transforming from a ‘nobody’ into a strong young woman, standing up to the bullies in school, and claiming back her free will from her aunt who had bound it for her entire childhood. As a debut novel, it’s also the first in a series and I, for one, cannot wait to read more.