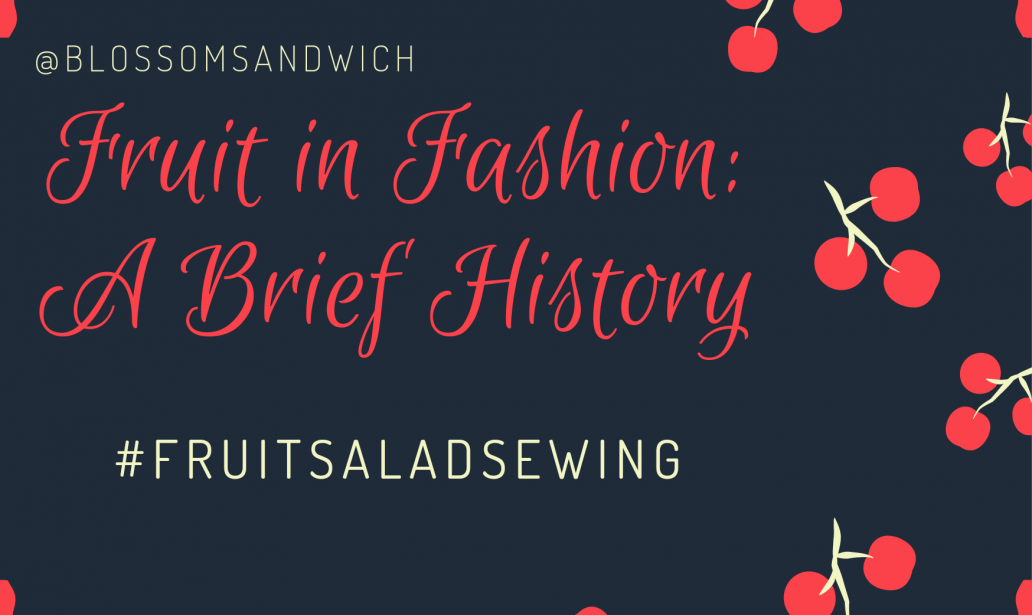 I really love this challenge Yvette (@blossomsandwich) has been hosting on Instagram (you can join in by using the hashtag #FruitSaladSewing).

It got me thinking about how fruit has featured in fashion, historically. Fruit prints have been really popular over the last few years, instigated by a fruity revival on catwalks over the last couple of decades.

Phoebe Philo sent out graphic banana prints at Chloé in Spring 2004, saying her inspiration came from the “fresh and happy” models in vintage fashion magazines.

Stella McCartney’s citrus prints were the talk of Paris Fashion Week in Spring 2011. This double-slit dress modelled by Anja Rubik was a contender for dress of the season.

Dolce & Gabbana turned to the produce markets of Southern Italy as inspiration for their Spring 2012 collection.

Stella Jean made her Milan Fashion Week debut in Spring 2014 with a fruit filled collection which pointed to her Haitian heritage.

David Lynch’s movie Wild at Heart inspired Joseph Altuzarra into cherry- and lemon-print everything for Spring 2017.

Pineapples have always been a Gucci favourite, like this satin and viscose gown with statement sleeves.

Fruit prints are not new in fashion. C18th fashion chronicles are full of records of aristocracy wearing embroidered waistcoats and dresses, often embellished with berry motifs. This gown is brocaded in vibrant motifs of roses, berries, rose-hips and trails of flowers. The silk of this particular gown dates around 1745, the dress was remodelled later in the C18th, sometime between 1785 and 1790. Held by the Fashion Museum in Bath, this silk design is considered reminiscent of the work of Anna Maria Garthwaite, a leading textile designer who lived and worked in Spitalfields (1690–1763).

The Cooper Hewitt Museum in New York holds this French example of an C18th waistcoat.

It is dated between 1785 and 1795 and depicts Dido and Aeneas in a scene from Didon, the 1783 opera by Niccolò Piccini based on Virgil’s Aeneid. Set in the 9th-century-BCE city of Carthage, the two main characters stand before a low-latticed wall topped with ornamental urns filled with flowers. Look closely and you’ll see fruit trees featured.

In more modern C20th fashion history one of the most memorable creations for me is Elsa Schiaparelli’s grape hat. Her involvement with Surrealist artists such as Salvador Dalí inspired her to create clothing and accessories that could make the viewer look twice. Schiaparelli treated fashion ironically; for her, the idea itself of wearing fruit on one’s head was humorous and surreal, but the fruit are also extremely realistic and the hat is functional.

Dior had had a sweeter take in this toque from 1953, decorated with cherries, blueberries, and strawberries which came to a widow’s peak between the wearer’s eyebrows. The tomato print dress featured on the double spread was designed by Givenchy.

There is something about fruit prints that blurs the boundary between frivolity and seriousness and my choice of fabric for the challenge really does play on that. Watch out for my next blog on my chosen print for this challenge – it has to be cherries!