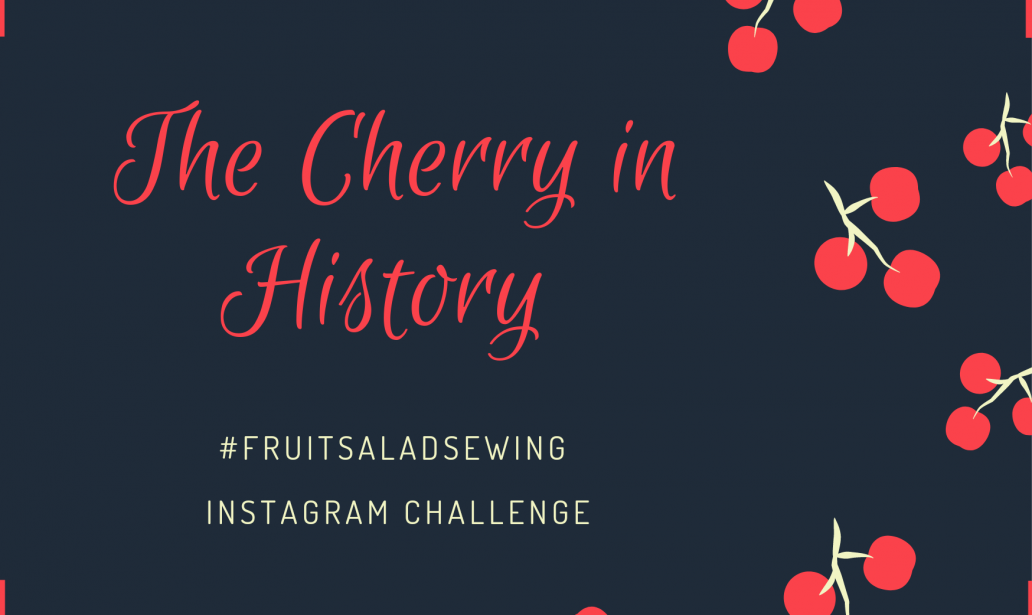 I was writing a short piece on cherry print in fashion (as I'm sewing with it for the #FruitSaladSewing challenge) but I could not resist a short cultural contextualisation of the cherry in history. I've made it a preamble to the fashion history blog post incase you don't share my enthusiasm for art history and literature.

Excuse the pun but the cherry is popping with cultural significance!

We think of the cherry as a summer fruit but, historically, the cherry was associated with Christmas. Throughout the Medieval period, apocryphal tales about the Virgin Mary and the Nativity permeated society; for example, The Cherry-Tree Carol, based on a mid C15th mystery play cycle.[1] Like a lot of texts from the Medieval period, this is a risqué piece. In the most popular version of the poem, Mary and Joseph stop at a cherry orchard and Mary asks her husband to pick cherries for her, because she is with child. Joseph replies with spite, telling Mary to get the child’s father pick her cherries.[2] So, even the earliest connotations of the cherry are similar to those that exist today; the cherry as a symbol of sex.

The association of the Virgin Mary with the cherry is also prevalent in Renaissance art. You can see it in the works of Titian, Quinten Massys, Bartolomeo Montagna and even Leonardo da Vinci.

Massys’ depiction shows the Virgin kissing the Christ Child while holding a pair of cherries in her right hand. There are different layers of meaning for the viewer in this painting. In a literal sense, the cherry motif may be a visual allusion to maternal lips and breasts. On a more spiritual and symbolic note, the red tone of the fruit may be pointing towards the blood of the Crucifixion. Other notable portrayals of Madonna and the Cherries include those by Titan, Giampietrino, and Barocci.

In A Midsummer Night’s Dream, Shakespeare reveals potential for two post-medieval meaning of the cherry – one innocent, one more carnal – when, during the mechanicals’ play, Thisbe professes to a wall, “my cherry lips have often kissed thy stones.”

Later, cherries frequently appear in secular art, sometimes in portraits of children, representing purity. One example of this is young Mary Beauclerk with her basket of cherries, painted by James Earl (1793–94); along with the white dress, the cherries evoke youthful innocence.

Almost a century later, Joseph Caraud takes a different approach. In ‘Cherry Girl’, a young woman in a provocatively ruched dress, poses with a bowl of cherries. She is taking cherries from the bowl while confidently gazing at the viewing. It blends the look of a ‘good’ girl with naughty ideas. Purity is perfectly balanced with desire.

As time went on, the cherry increasingly took on sexual overtones. The first modern instance of the cherry as a term for the hymen dates back to 1889 in an Oxford English Dictionary entry. Jonathon Green, in Green’s Dictionary of Slang, explains that the cherry is based on the notion of ripeness; virginity tends to be seen as something to lose. He traces the he origins of virgins “losing” their cherry or getting it ‘popped’ to the early 1900s.

The forbidden fruit is in all aspects of modern culture (I could go on at length about music references) but perhaps one of the most iconic moments for the cherry is in the scene from Twin Peaks where Audrey Horne slips a cherry between her red lips , embodying the ambiguity of the cherry over the past several hundreds of years – something overtly sexual but also innocent and pure.

All fruits are essentially sexual – it obviously goes way back to the garden of Eden – but cherries definitely come out on top!

[1] JOSEPH was an old man,
And an old man was he,
When he wedded Mary
In the land of Galilee.
Joseph and Mary walk’d
Through an orchard good,
Where was cherries and berries
So red as any blood.
O then bespoke Mary,
So meek and so mild,
‘Pluck me one cherry, Joseph,
For I am with child.’

[2] The origins of the tale are in the Apocryphal Gospel of Pseudo-Matthew, in which the tree is a date palm not a cherry tree. Its transformation into a cherry tree appears to be an English reinterpretation of the tale.