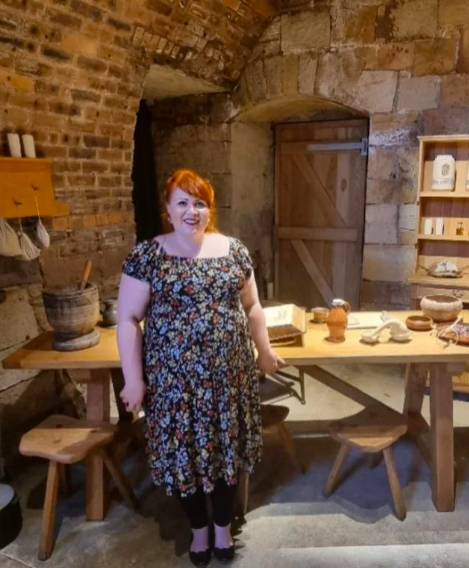 It has been quite a while since I’ve been on the blog to share what I have been sewing ; my YouTube has taken a backseat, too. In fact, I’m not even sure I’ve mentioned to visitors of my blog that I now have a YouTube channel; if you’re not familiar with it, you can find me here.

I have sewn a few things over the past couple of months but the momentum and enthusiasm for sewing has dwindled a little, being – at the time of writing this blog post – 6 months pregnant. The tiredness alone was an obstacle; I could just about function long enough to get through the 9-5.

I haven’t spoken about this on any of my social media channels, for a few reasons;

Firstly, I appreciate that this can be triggering for people who are suffering from pregnancy loss (I have been there multiple times so I can appreciate how hard it can be; even when you’re happy for others, a pregnancy announcement can sting) or are having difficulties conceiving; I feel the unfairness of those situations and I send any of you reading this who are suffering so much love.

Secondly, as a woman, my body has always been up for discussion. In my twenties and early thirties, when I had no plans for starting a family (and especially following my marriage) everyone had something to say about why I should have children, how selfish I was not to have children (even though their counter rationale was that I would have no-one to look after me when I’m older – the irony was lost on them) or even how unwomanly I was to not be having children. I heard it all. In my mid-thirties, the comments started to be made that I was getting a bit past it to have children, that I was leaving it a bit late, that I would regret it if I didn’t… all the while, I experienced several miscarriages. At the start, I would bite my tongue and just act as if it didn’t affect me but then I started to speak the truth about my miscarriages when people both close to me and random questioned my ‘child-less’ status; it was a power, in a way, because it was the way to silence the critics. I reckoned that, if I put these people in their place, it might stop another woman from having to feel the discomfort of being blamed for something that was never her choice.

Thirdly, I have kind of been in denial about the extent to which being pregnant affects my body image. I am all for body empowerment and if you have visited my blog, you’ll know I have come a long way to accepting my natural curves and plus size figure. However, I am not going to lie, being pregnant and watching (not to mention feeling) my body change, has been hard to accept. I know it’s natural… but it just has not felt comfortable; and I am sure it will feel even more uncomfortable over the next three months. What hasn’t helped is the fact that people who are unaware that I am pregnant have made comments about ‘weight gain’ or my dresses being ‘tighter’ – and I’m not entirely sure why it bothers me so much but there is not denying I’m having a body crisis of sorts.

In part, I believe that this is the case because my wardrobe choices are now limited. My self confidence comes, in part, from wearing form fitting, vintage-inspired dresses; and, let’s face it, this is not a style a plus size pregnant woman can wear as the body expands and changes. Instead, I have been wearing mostly jersey dresses or making a few woven dresses by grading out the waist and adding gathered skirts. The only mercy, really, is that I can sew and I don’t have to deep dive on the internet for clothes that suit not only plus size pregnant women but that appeal to my style (which, I have to say, they generally don’t). I have no intention of wearing maternity leggings / jeans and baggy tops / t-shirts.

Another concern for me is sustainability – this was one of the main reasons I took up sewing in the first place. Realistically, how much of a lifespan will maternity clothes have? No more than a year; from 4 or 5 months into pregnancy to a few months post birth. Do I really want to invest time and good fabrics on this? For the past couple of months, I have been getting a lot of wear out of my Colette Patterns’ Moneta dresses and my Charm Patterns Rita Blouse dress hacks but most of the rest of my wardrobe has been abandoned, having been very fitted at the waist and bust. I don’t really want to spend time and money making dresses that I cannot wear after my pregnancy. So my sewing will be slow; I have plans to make a couple of plain Cashmerette Alcott dresses (which are pregnancy and breastfeeding friendly and to try out the Joni dress by Tilly and the Buttons. However, for the next few months my dressmaking journey my become a little staid when it comes to fancy dresses – my apologies in advance but there’s nothing I can do. As tempting as it might be to sew for the body I had in the hopes that it returns, well… I think that might be a little too idealistic, don’t you?

So, what have I been sewing then?

In July, as little as I have ever sewn.

I made another Jennifer Lauren Handmade Dress (which I had previously tested in June and discovered could fit) but this time in a floaty viscose rather than cotton to allow for a bit more give.

As an aside, not long after I discovered none of my heels fit any more – none! I’m resigned to flat shoes until after this pregnancy is over.

I also made Simon the Merchant and Mills tee shirt pattern. It’s not an ordinary tee pattern, though; Merchant and Mills have created a smart, contemporary take on a basic wardrobe staple. Their Tee Shirt pattern is a smart combination of a woven fabric – I have made it up in linen – with a stretch rib neck; the breast pocket is a smart finish, too. It has a bit of edge stitching which elevates it just a little, too.

It is so simple and straightforward to sew – it doesn’t even take an hour. Even though it is simple, it is also quite enjoyable and satisfying. Simon wasn’t home for me to check the fit (particularly in terms of the length which he can be a bit fussy about and next time I will add a little length).

Oh – and another thing; the pattern is unisex (not that it’s *my* style).

I managed to stitch up a few more things in August as the tiredness and nausea gave me a couple of weeks reprieve – it’s probably the only two weeks of ‘glowing’ that I will see.

I made a few of my favourite stretch pattern; the aforementioned Moneta dress; one from a gorgeous mint floral viscose jersey I bought ages ago from The New Craft House and a couple of others from my Jenny Stitches Fabrics stash; a red poly blend and a purple cotton jersey (which, incidentally, was made to accompany my latest Jenny Stitches blog make which I think will be live next week).

I also managed to sew up a couple of Rita dresses before taking a break in Scotland for a week, one from an exclusive Minerva viscose that was sent to me as part of the Ambassador programme and another red polka dot (also viscose) from Jenny Stitches Fabrics, worn here at ‘Lallybroch’.

Hopefully I’ll continue to have projects to share with you all in the next few months (and will probably include some mini-makes, too). I’m just not all that flexible for cutting large projects any more.