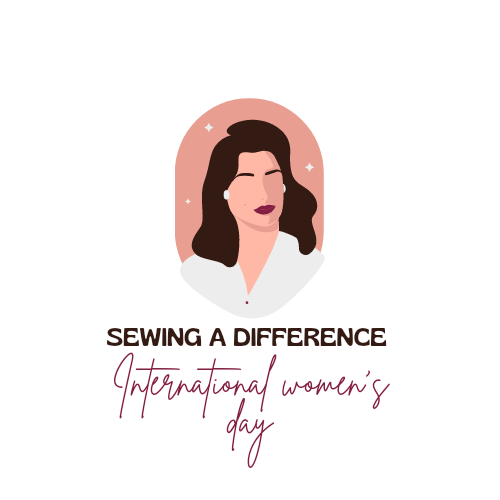 There are so many great women who have made a difference, many of whom were women of the needle and I thought, given the day it is, I would round up some of the most interesting stories about notable seamstresses I have come across in my reading.

Elizabeth Keckley was born into slavery in Virginia in 1818. She was the child of a forced sexual relationship between her mother, Agnes, and her enslaver, Colonel Amistad Burwell. Elizabeth did not learn the truth about her parentage until she was an adult. When she was only four years old, Elizabeth was forced to work watching her enslaver’s baby (her half-sister). As a 4 year old, Elizabeth was so young that she did not know how to take care of a newborn. She rocked the cradle too hard and the baby rolled out; she was punished and severely beaten which left a lasting impression on her young mind. Her mother taught her how to sew and by the time she was in her teenage years, she was providing the income for the 17 members of her owner’s family almost entirely by herself. She worked tirelessly to save enough money to buy freedom for herself and her son, who was born in 1839 after she was repeatedly raped. After many hardships under brutal owners, she bought her freedom in 1855 with money she had borrowed. Now a free Black woman, Elizabeth worked as a dressmaker in St. Louis for the next five years. With her earnings, she paid back every person who had donated to her freedom fund. In 1860, she moved to Washington, D.C.

Through her contacts among the women of St. Louis, Keckley caught the attention of Mary Lincoln. Lincoln was impressed by the finish of Keckley’s garments and admired her work ethic; Keckley was always willing to work long hours to finish a garment. Keckley’s style was not atypically Victorian – her garments were simpler, with cleaner lines than was common of the frilly and fancy styles of the time. Few pieces exist today that can be attributed to her with certainty, because clothing was not labelled and dresses were often recut and redesigned to save fabric; however, this dress of Mary Lincoln’s has been attributed to Keckley, held at the National Museum of American History..

In addition to her influence on fashion in the capital, Keckley worked to assist freed slaves who came to the city in search of a new life. Keckley encouraged the creation of the “Contraband Relief Association,” which helped freed slaves find their place in society and relieve them from the effects of poverty.

She was such a remarkable woman and you can read more of her life in her own words as she published her autobiography, Behind the Scenes: 30 Years a Slave and 4 Years in the White House, in 1868. The publication of the book caused a rift between the First Lady and Keckley. They never spoke again after it was published.

In 1890, Wilberforce University appointed her the head of their Department of Sewing and Domestic Science Arts, but she had to resign the position in 1893 after suffering a stroke. She spent the rest of her days in retirement, passing away in 1907.

Ellen Louise Demorest was born in Schuylerville, New York, on November 15, 1824. From an early age, she was fascinated by fashion. She worked as a milliner, through which she met her husband, William Jennings Demorest. The story goes that, on a day in 1854, she saw her African-American maid cut a pattern out of thick brown paper before making a dress, which gave her the idea that she could she was struck with the idea that she could copy fashionable garments on to paper for the home sewer.

In 1860, along with her husband and sister, she established a company to sell patterns, mostly adaptations of the latest French fashions, and a magazine to promote them. These patterns made French styles accessible to ordinary women, greatly influencing American fashion. Madame Demorest’s Mirror of Fashions, a pattern catalog, was introduced, which featured sewing and fashion advice and a pattern stapled into every issue.

By 1865, she was so successful that she had thirty distribution agencies and employed over 200 saleswomen. In 1876, Demorest reached the height of its popularity, distributing and selling over 3 million patterns. By this time, she had over 1500 women working for her.

Another thing that’s notable about Ellen Demorest is that she was an ardent abolitionist and women’s rights advocate. She employed both black and white women in her enterprises in an attempt to challenge and dismantle racial segregation. All workers, regardless of gender or race, received the same pay. Anyone who objected was asked to shop elsewhere. Her magazine had a dedicated monthly column entitled “What Women are Doing,” which detailed the accomplishments of women of different occupations across the country. When business was still a man’s world, Demorest was actively focused on women.

Ironically, she failed to patent her paper patterns but another inventor, Ebenezer Butterick, did. Initially Butterick only printed men’s and children’s wear, but by 1867 he expanded to women’s patterns as well.

A young Russian-Jewish immigrant, Clara Lemlich Shavelson came to the United States in 1903 at age 17. She had already witnessed a lot of social injustices and was an avid reader of revolutionary texts.

After six years of working in clothing factories – she had some sewing skills so found work as a seamstress – where employees faced long hours and unreasonable conditions, Lemlich descided to rebel against these poor workplace standards. She joined the International Ladies’ Garment Worker Union (ILGWU) in 1906 and became a member of her local executive board. She soon became one of the most notable voices and in 1909 she took to the stage of a meeting and demanded action in the form of a strike in the garment industry.

Twenty-thousand workers rose up in agreement with her. She became known as the “Joan of Arc” of the movement, later called the “Uprising of the 20,000.” While the strike did not have immediate effect on working conditions of those who took part in the strike, it formed the groundwork for future progress.

Lemlich was blacklisted from New York City garment factories for her role in the uprising. She remained a staunch supporter of labor, suffragist, and Jewish rights until she dies in 1982, aged 96.

We all know Rosa Parks as a Civil Rights activist but did you know she was a seamstress? I only really picked up on this recently, probably because I’ve taken up sewing as a hobby!

“I had given up my seat before, but this day, I was especially tired. Tired from my work as a seamstress, and tired from the ache in my heart.”

We really only think about Rosa Parks as that brave women who protested on the bus by refusing to give up her seat but Parks worked as a seamstress at a department store, tailoring and fitting garments for the white residents of Montgomery.  Her hours were long and the work would have been humble for a woman as educated and literate as Parks was; she had learned to read and write at an early age by her mother and performed well academically despite having access only to a one-room elementary schoolhouse and secondary grades at a segregated school for girls. She went on to attend a laboratory school but was forced to leave in her junior year to care for her grandmother and never returned.  Instead, she took a job as a seamstress in a shirt factory, and sewing became her daily life.

When Rosa Parks made the decision to stay in her seat, she did so after hours of labouring at her sewing machine, fully aware that she could lose her job as a seamstress at the department store. She did, in fact, lose her job. She knew the cost of her actions: but she acted in response to years of bearing witness to injustice:

“I had no idea that history was being made.  I was just tired of giving up…I would like to be remembered as a person who wanted to be free, so other people could be free.”

In addition to making the decision to stay in her seat on that day in December 1955, Rosa Parks was an member of the NAACP until 1957 and was tireless in her campaign for equal rights for black Americans.

When you think of Stephanie Kwolek, you wouldn’t align her scientific contributions with a sewing machine… but that’s where it actually all started.

Born in 1923, Stephanie Kwolek was the daughter of a scientist father and a seamstress mother.  While her mother was not a professional seamstress, she passed her love of sewing and fashion to her daughter. In fact, Kwolek admits that her mother hoped she would pursue a career in fashion:

“[I was] a very creative child. I watched my mother sewing and making patterns.  I imitated what she did. I remember lying on the floor and drawing, making costumes for these paper dolls.  [When] I was slightly older, then I made actual clothes from fabric.”

Kwolek’s inherited her love of creativity from watching her mother. This had a lasting impact on her.

Kwolek won a scholarship to study biology; after her undergraduate studies she pursued a career in chemistry.

She went to work for DuPont, beginning her research in the lab the world’s first synthetic fibre had been created: nylon. Here Kwolek was assigned in 1965 to a team seeking a new fibre to replace steel wire, research instigated by the looming shortage in gasoline: lighter tyres equals better fuel economy, and lighter tyres require something other than steel wire. Kwolek and her colleagues worked with extended-chain polymers, which are spun into fibre in a manner not dissimilar to cotton candy.  Kwolek invented what would become known as Kevlar.

Kevlar is five times stronger steel and vastly more lightweight; it is best known for being used as body armour but it used in hundreds of everyday items, from gloves tyres.

Kwolek’s love and understanding of fabric and textiles has changed so many things; kevlar is even used in the fibre optic cables which gives us the internet! I’m sure she would have made a wonderful fashion designer but her understanding of fibres has definitely served the world better in the lab; bulletproof vests have saved countless lives.

“I don’t think there’s anything like saving someone’s life to bring you satisfaction and happiness.”

I wonder would her scientific achievements been possible without her interest and knowledge in sewing and textiles. It is amazing what material is capable of.