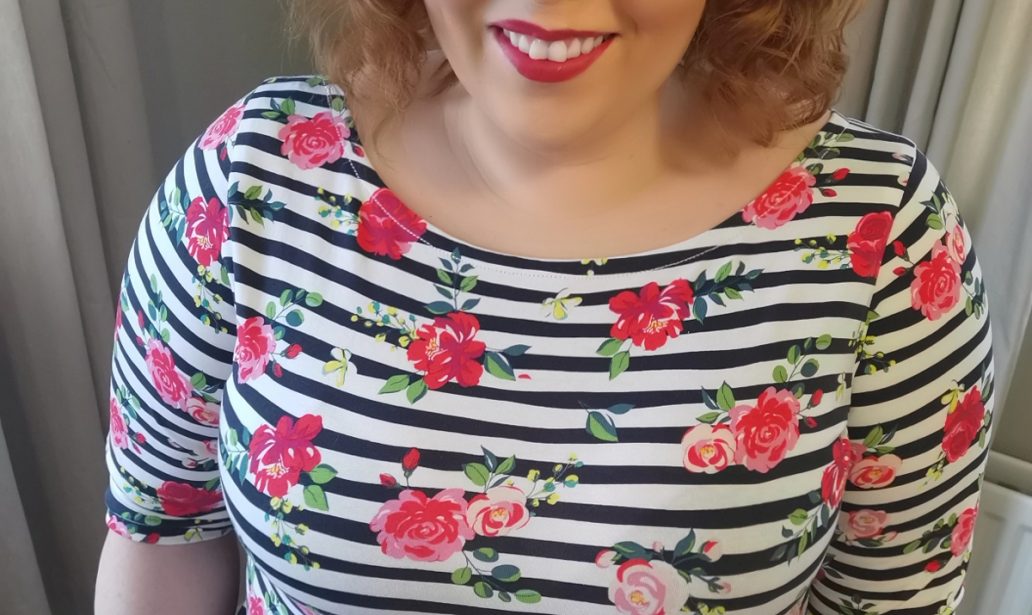 This post was originally written for and published on the Sew Anonymous Sewist Blog.

I have not always been comfortable with or accepting of my body. I was the chubby child who became the early developer with curves in all the places I’ve now grown to love but singled me out in my adolescence as ‘different’ and made me a target for grammar school bullies. I grew up in a home where my ‘fatness’ was a weapon brandished by my mother to keep me ‘in my place’ – I was intelligent (always top of my class), musically talented, involved in sports and kind natured but none of this mattered because I wasn’t ‘beautiful’ like my sister. Others contributed to this; the amount of times I heard the words, “you could be so beautiful if you lost weight” or “you have such a pretty face”.  Consequently, I grew up with this overarching sense of shame about my appearance which caused me to have an unhealthy obsession with food and exercise throughout my 20’s as I attained and attempted to maintain a size 8 (at one time, size 6) figure. It also played a large part in my marrying an emotionally abusive and manipulative man, a relationship which caused a great deal of damage.

For years, I maintained the weight loss but with great effort and almost devastating results on my mental health and social life. At first, people were full of compliments – men who used to look through me started to stop and stare and then try their ineffective charms. But as I lost more weight, the criticism came – “you look ill”, “you were much prettier before you lost weight”. I began to realise that no matter how thin or curvy I was, I’d never be quite right for people – they’ll always find something to try and tear you down – so I stopped trying.

“To be beautiful means to be yourself. You don’t need to be accepted by others. You need to accept yourself.”

I stopped counting calories. I stopped making myself run for 8 miles to atone for eating steak and salad for dinner. I escaped the soul-destroying marriage. I started loving life again; I started letting my body be what nature intended and I found someone who saw who I really was and appreciated every aspect of me.

I found a love for vintage inspired fashion, for the prints and the structure of the 40s and 50s. I stopped visiting the likes of Hobbes, Karen Millen, Reiss and Oasis, tired of having to try on every single item of clothing to find which of three sizes fitted me. For a while, I revelled in vintage reproduction clothing which was much more suited to my shape and celebrated female curves but after a few years some labels started to change their size charts (not that they’ll admit it) and inconsistency became a problem once more. As the reproductive fashions became more popular, the standard of making got worse and after a few buys where things arrived with seams unfinished or the colour washed out after a wash, I became disenchanted with these brands, too.

With sewing, out came the tape measure and good quality fabrics. I no longer had to try on clothes to find my size. I discovered my size and started making the clothes to fit it! I was finally in a place where I accepted the reality of my curves and sewing further empowered this self-acceptance. Here’s the happiness in picking up a needle and thread – you no longer judge yourself by the accepted set of measurements that govern the high street so inconsistently.

If someone asked me for a single reason why I recommend sewing? Simply put, it’s hard to reject your body when you sew. Sewing means learning to work with your body – the option of rejecting it is off the table and you learn to embrace it. You look at your body objectively – instead of judging how your body looks, you start assessing how shapes can match your body and how to adjust them if they don’t. When sewing your own clothes, you no longer have to fit a retailer’s tick box. Every one of us have a unique, exclusive body so why not treat it that way and dress it instead of trying to make it fit the poor standards of standardisation?

“You have been criticizing yourself for years and it hasn’t worked. Try approving of yourself and see what happens.”

I remember the moment when I realised that I’d won the battle against my self-criticism and anyone who would use my weight as a mechanism of control or means of insult.

Not long after I started sewing at the start of last year, a woman (or a betrayal of the word) started harassing me with taunts about my weight and jeered at the very idea of me going to the gym. You don’t expect this kind of behaviour when you leave school, do you? My body is what it is. I’m a curvy girl.  What’s so laughable about me going to the gym? Is it because I don’t lose weight? How awful that I don’t feel the need to vanish away into those old size 8 dresses I wore in my twenties. Am I overweight? Sure – according to the BMI chart (we all know that’s a nonsense anyhow). But, on the other hand, it’s been suggested that I’m not “fat enough” to qualify as a “plus sized sewist”. Having spent most of my life apologising for not being thin enough, you can sure as hell put money on the fact that I’m not going to start apologising for not being fat enough. For me, my concern is my health, both physical and mental. So long as my weight doesn’t impact on either of those things, who has any business commenting on my body?

Fat shaming exists. Thin shaming exists, too. I’ve experienced both during my lifetime. The female body is always up for review. But there is something about women shaming other women’s bodies that will always make me uncomfortable. Women should be supporting other women – we should be celebrating our differences and our individuality – instead of trying to destroy them.

Women don’t need other women trying to dismantle them – the truth is, most of us are our own worst critics. Like many of you, my journey of self-acceptance has been a long one. My younger self would have been really upset by the jeers about me using the gym. She would have started skipping meals. She’d have spent three hours in the gym instead of one. She’d have cried and avoided going out with friends because every dress she put on made her look and feel fat. But I’m not that girl anymore. Why? Because for the last few years, I have proactively maintained and improved my own body image, especially through the clothes that I wear. Sewing has been instrumental to this.

Why would you not want to wear clothes that are made for your specific measurements? Clothes that are made for YOU – no matter what size or shape your body is – will make you feel better about your body. We’ve all been there – ready to wear clothes aren’t always that comfortable – remember that button on the blouse that threatened to pop open, that sleeve that was a little too tight, the skirt that hugged your hips but was way too roomy at the waist? These ready to wear clothes were made to fit a model, not you. Just a specific person with specific measurements that some faceless company decided was ‘standard’ and then graded the sizes accordingly. That ‘standard’ is a myth. If you have different measurements or are shaped differently to that model, you’ll need to alter those clothes.

If people want to try dragging me down, they’ll have to try something other than attacking my body.

Remember, self-love is the greatest middle finger of all time!

2 thoughts on “The Weighty Issue: What Size Matters?”