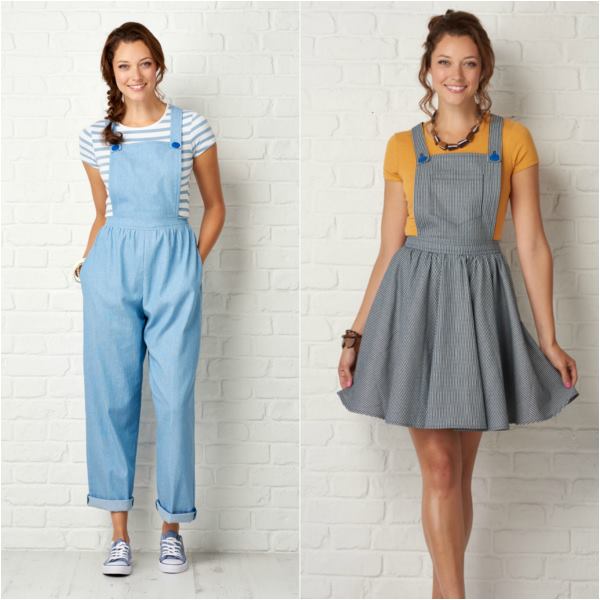 This pattern comes in two variations – a bib overall and a bib pinafore skirt version. Both the bib overall and pinafores have a long history and their transition into modern styles is a long and interesting one.

Consider the etymological definitions of the words (which are by no means definitive):

How have garments that used to be associated with children and utilitarian necessary transformed into a wardrobe staple?

The history of garments fascinates me. Over the years, overalls and pinafores have evolved to meet the needs of their wearers. No longer (merely) a protective garment for men and children, they have become a popular choice of casual dress for women.

Up until World War I, overalls were mainly worn by men as workwear. It was not until women were needed to help support the war effort by entering the workforce, that overalls become part of a woman’s wardrobe.

After each World War, more fashionable versions of overalls were designed for women featuring variations in necklines, waist-cinching features, even small, decorative pockets rather than the large utilitarian ones; as is the case so often, fashion started to influence function. While workwear garments were made from denims or canvas, fashion-oriented garments started to be made in lightweight cottons.

While there is no patent for bib overalls until Levi Strauss & Company patented them in 1873, there is extant evidence of their use going back as far as the late 1700s when they were often made out of denim and worn as a protective, durable garment.

They were also used to visually delineate between race and class. There is an excellent article on this history here – denim is closely intertwined with slavery and the Black freedom struggle.

Where the overalls have a history rooted in class and race, the pinafore has a gendered history. Traditionally, whether for children or women, it has always been considered a type of apron. Today, we think of it as a sleeveless dress, to be worn with something underneath; a blouse or top. Wearing an item of clothing under a dress is not a modern style – it goes back to the Renaissance period. Women’s dresses were often low cut and slashed allow for exposure on what was underneath; this was a practical fashion born out of function. The gowns that women, and I’m talking here about the upper classes, would have been made of such luxurious and expensive cloth, featuring ornate embellishments and embroidery, that they could not be washed for fear of ruining them so they would have worn undergarments with their gowns to protect them from contact with the skin. With the slashing features, the undergarments became increasingly exposed and much more decorative; as seen here in this portrait of Empress Isabella of Portugal, painted by Titian in 1548.

This practicality of protecting expensive garments re-emerged in the Victorian period, less to protect clothing than to widen up their wardrobe and give outfits more variation; underbodices were often made to match or contrast with dresses. This is exactly the same trick modern pinafore dresses allow for.

One of the most iconic images of the pinafore dress in the last hundred years is Judy Garland as Dorothy in The Wizard of Oz (1939). This holds true to the traditional view of the pinafore as something children wore to protect their clothes. The features of this dress were chosen to make her look younger than she was (then aged 17); the blue gingham which chosen with the intention of blurring her figure, was teamed with a high neck blouse and full sleeves, not to forget the pigtails, to heighten her child-like appearance.

In Shop Around the Corner (1940), theres a beautiful combination of a cross over pinafore with a bishop sleeve blouse.

In Woman of the Year (1942), Katherine Hepburn (as Tess Harding) wears one of my favourite manifestations of the pinafore dress (I also love this collarless blouse).

Also in 1942, Ginger Rogers in The Major and The Minor wears a pinafore when pretending to be a 12 year old girl. In the same film, she also dons a pinafore smock to pass for her own mother.

In State Fair (1945), Jeanne Crain wears a similar style of dress to Dorothy.

One of my favourite pinafore stylings in film is Audrey Hepburn in Sabrina (1954), styled by Edith Head and Givenchy for which the film won an Academy Award for Best Costume Design.

This black pinafore, covered in white polka dots, over a black long-sleeved t-shirt, elevated the pinafore dress to a more mature style. There were, unsurprisingly, many pinafore style patterns available in this decade.

She wears another iconic pinafore style dress ten years later in My Fair Lady (1964) – with the full skirt, it is appropriate for her dancing role.

I opted for the skirted version of The Sunday Set as, in my head, at least, it blends all these aspects of history of the pinafore and overall. That and trousers just don’t feature in my wardrobe. With the bib and the full skirt, the utilitarian and ultimately feminine are aligned. I made it in a 4oz denim from Fabric Godmother as I am trying to fill the gap in my wardrobe for staple garments to wear with the array of handmade tops that are infiltrating my dress collection.

It is befitting that I should make this on the first day of Me Made May so I’ll be able to get much more wear out of my tops.

I love many of the features of this pinafore dress, not least the volume of the circle skirt. The pockets are also a great size and I love that the straps cross over at the back.

A couple of things, though – there is a lot more garment ease in this pattern that you’d expect. The button fastening at the back of this has been manipulated to fit a bit better as I wasn’t for unpicking the whole thing! I don’t know who the pattern was drafted for but it’s someone much taller than me judging by the length of those straps. If I was making this again, there are a lot of things to be aware of – I’d probably adjust the bib size, too.

I opted to put the buttons on the back of the bib, but with a good reason. I intend on wearing my brooches on there and I don’t want the bib to be too busy.

To be fair, this is not the kind of garment I’ve ever had in my wardrobe before but for casual wear I think I will get a lot of use out of it.

3 thoughts on “Cotton and Chalk, The Sunday Set”