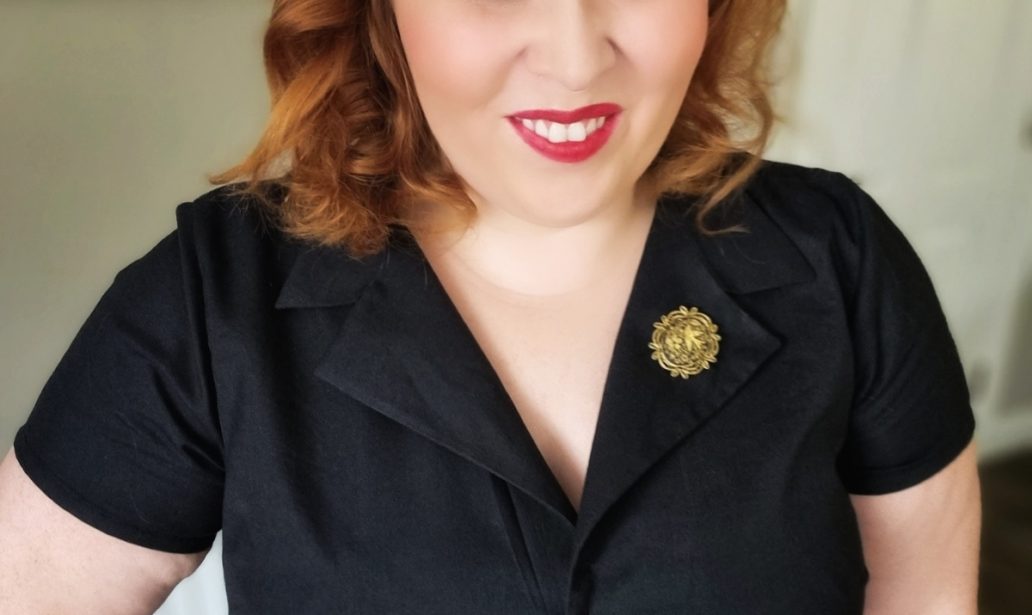 I think the July Patreon was one of my favourites to date – the Scout Dress, which is a quintessential 1950s inspired shirt waist dress. This is the pattern I’ve always wanted – it carries real Grace Kelly vibes and is even reminiscent of the New Look (which I have written about in my previous post on the history of the Shirtwaist Dress).

I think it took longer deciding what to make it in than it did to actually sew it. Sally (@theyorkshiresewist) and I sent pictures of all sorts of fabrics to and from each other; florals were a popular occurrence but in the we decided to make it in plain black as it would ensure it would get a lot of wear and be appropriate for pretty much every occasion. Sally actually found the fabric we ordered (so do watch out for her dress as we’ll be twinning once she makes it) at 1st for Fabrics – ingenious, really… The pattern requires 5 metres of fabric but this fabric was 94″ wide (it’s their extra wide polycotton and it only cost £5/m which makes this the most frugal make in my wardrobe. I had no idea what to expect from polycotton and had the preconception that it would be thin and transparent but Sally reassured me that black was ok and she was right. It washes well, it presses better than 100% cotton and it sews up a dream.

The construction of the dress itself is also a breeze – in fact, most of the labour comes from cutting out the pattern pieces; I mean, there is serious yardage in that skirt! There is nothing here an adventurous beginner couldn’t handle. It’s a straightforward collar and facing, there isn’t even a button placket to worry about.

The only thing I changed about the pattern is the sleeves; I love the original puff sleeves; with their keyhole feature and cuff but I wanted something that could be layered so I drafted a simple short sleeve instead. I graded out between a 12 D/DD to 14 at the waist and other than that I didn’t make any modifications to the pattern. The sizing on Gertie’s patterns are really generous, I find (and she’s just extended her pattern size from 2-20 to 2-30 which, for vintage styles, is no mean feat; I think it is important to acknowledge that is takes a hell of a lot more work to expand sizing for these fitted styles that Gertie is known for than it does for something like Tilly and the Buttons, many of which have few fitting skills).

This is the kind of pattern I’ll come back to. I also think a long sleeve version would be beautiful, too; maybe one in taffeta for evening wear would be nice.