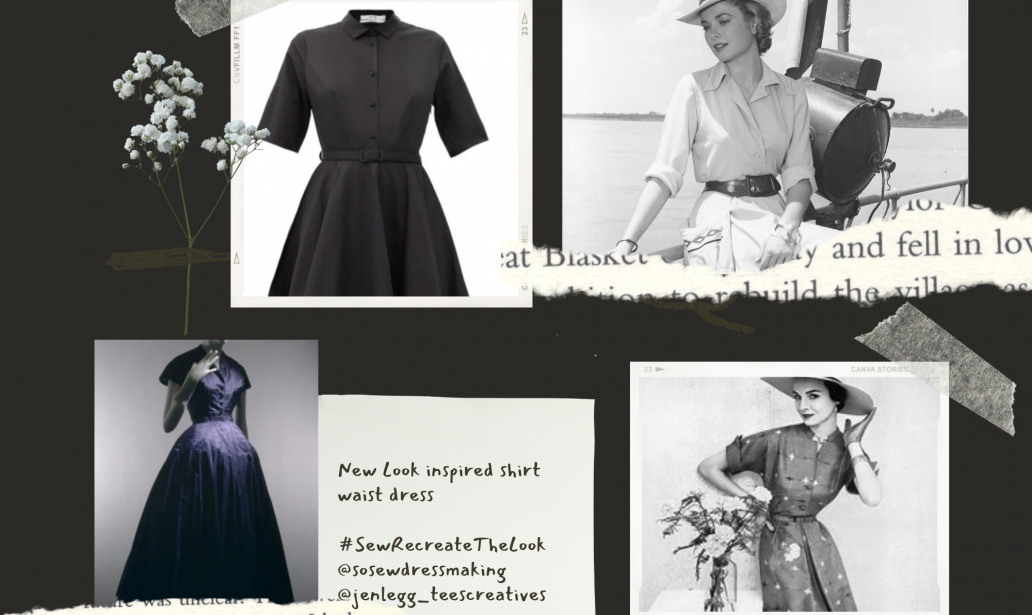 There’s a new sewing challenge on Instagram right now which is right up my street – #sewrecreatethelook, hosted by @sosewdressmaking and @jenlegg_teescreatives.

The brief: take inspiration – whether it be from Pinterest, the catwalk, the high street or another makes – and recreate the look. For me, vintage fashion is my constant inspiration so I will be drawing from that for this challenge.

Well, imitation is the sincerest form of flattery. There are a couple of makes I have in mind, but I don’t have time to indulge them all (at least, I don’t think I do). I’ve settled on prioritising a garment that has enjoyed many reincarnations but remains quintessentially iconic – the shirt dress, particularly the one we associate with the 1950s.

I am so interested in the historicity of fashion which is where my love of this garment originates. The shirt dress has proto-feminist origins. The shirtwaist dress, also referred to as the ‘shirtmaker’ or just the ‘shirtdress’, is an American classic. It has enjoyed many reincarnations throughout the twentieth century and into the twenty-first. It originated with the shirtwaist blouse, an early American ready-to-wear garment that emerged as part of the uniform of the New Woman in the 1890’s, women who demanded the same educational and professional opportunities as men.

Essentially a blouse, it would have been worn with a tailored skirt. New Women rejected the fussy dresses of the Victorian Era in favour of progressive clothes, inspired by menswear. Since it did not require precision in fitting, it was the first female garment to be mass manufactured.

Helped along by the First World War, which saw women in the workplace in unprecedented numbers who needed appropriate and functional garments, the shirtwaist and skirt were merged into one. By the 1930s, the shirt dress had transformed more or less into what we know it as today. It was a basic in many women’s wardrobes for decades. The most popular style of day dress during the 1940’s was the shirtwaist dress.

This look continued to pervade fashion during the 1950s. Stripes, plaid, gingham, and solid shirtwaist dresses continue to be popular. It made appearances in designer collections like Claire McCardell and Christian Dior, the man who was responsible for reviving the sort of rigid silhouettes the shirt dress had revolted against.

Again, in the 1960s, women continued to wear the shirtwaist dresses as house or day wear although the skirts got shorter and straighter and cuffs and collars both became smaller. It was during the 1970s that Halston designed the Ultrasuede shirt dress, which would become one of his most celebrated designs.

With feminism on the rise and women pursuing different careers, the shirt dress became a professional garment. The dress transformed again in the 80s, and became reminiscent of the 1940s version, being fuller and having feature collars, padded shoulders and featuring bold prints like polka dots.

The shirt dress remains a design template today, and season after season we see designers putting their own personal stamp on this classic style. It’s a remarkably versatile garment, as easily dressed down as up. You can wear it with sandals of pair it with stilettos and a clutch. You can make it in a variety of fabrics, from cotton to taffeta.  It isn’t fussy but there’s plenty of potential for movement and even sensuality; you can undo top buttons to make it more revealing or open the bottom to show a little leg. It allows the wearer to revel in femininity.