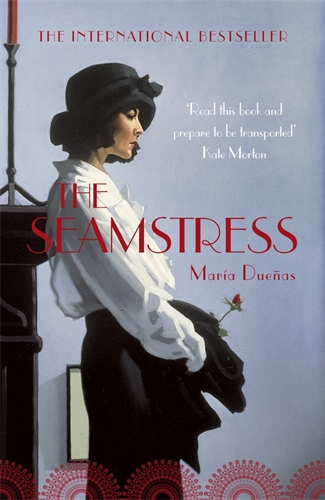 The Seamstress (The Time Between Seams / The Time in Between) is a wonderful tale of espionage and intrigue, adventure and fear, dishonour and love and it is not surprising that it has made María Dueñas a household name and catapulted her to the top of Spain’s bestseller lists. A couple of years after the book debuted, a television adaptation of the book was released, setting the record for the most watched television premiere in Spain.

Based on how much I loved the book, it’s going on my watch list, for sure! Interestingly, too, is the fact that upon the release of the TV show, online sales of sewing machines in Spain increased by 176%.  That’s how compelling this story is.

It’s a commitment read; the novel weighs in at 600 pages, but I was so drawn into the plot that I had finished it in a couple of day. This is escapism but intellectual escapism; you are immersed in the action which plays out in 1930s and 1940s Madried and Tangiers, and the romance and wonderful descriptions make for a sensual escape from everyday life (which is just what I needed this week).

Many of the characters of the novel have been drawn from real life (as an academic, it’s clear the author has done her research here): Alan Hillgarth, a British spy working in Madrid, Juan Luis Beigbeder, High Commissioner of Spanish Morocco and later Franco’s foreign minister and his English lover-turned-spy Rosalinda Powell Fox. It is this research which gives the novel a backbone and makes it all the more compelling.

Dueñas’ decision to make her protagonist a seamstress is not without significance and symbolism. Sewing is a notable signifier of femininity. A sedentary and passive activity, it was traditionally done by respectable women within their homes. Dueñas turns this female ideal on its head by making the heroine’s sewing skills the very thing that launches her into a world of adventure… and danger. Sira’s dressmaking skills and her attention to detail are what gives her the wherewithal not only to survive but to thrive as she plays her part in the British intelligence mission in Spain.

The strength of this novel lies in the expert characterisation, especially of the heroine Sira Quiroga. Her early life and training prepare her for a career following in her mother’s footsteps, also a seamstress. From the outset of the novel, the young Sira is a dutiful daughter, prepared to marry a dependable but dull man until she is swept away by a tall, dark stranger and resists a respectable, steady life. But in a turn of events, Sira finds herself penniless, pregnant and abandoned in Algiers, and has to try to rebuild her life while paying off debts amassed by the man who abandoned her and unable to return to Spain which is in the grip of Civil War. This is really a story of how whatever doesn’t kill you makes you stronger.

As Sira starts rebuilding her life, setting up a dressmaking studio and reinventing herself as a successful couturier, the tempo of the book gears up a notch when she embarks on a double life as a spy as the spectre of Work War Two looms on the horizon, passing information to the British Secret Service which she gleans from her German Nazi clients who speak freely in the safe confines of her shop. The very existence that threatens her life inspires her to really live it.

The action moves seamlessly from place to place as we follow Sira on her journey. It’s no surprise that the novel has been televised; it is an epic – the locations are breath-taking; the costumes are immaculate; and the characters are utterly mesmerising.