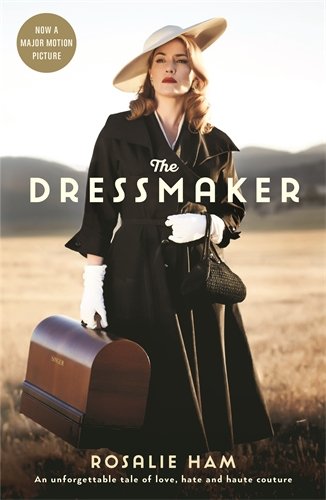 The Dressmaker was the debut novel of Australian author, Rosalie Ham. Published in 2000, it’s been around for quite a while, but I have only read it recently – it was a rather odd occurrence of having watched the film and then discovering it was based on a book. If you’ve seen the film, don’t think you know the story. The book is distinctly different – it’s much darker, for a start. It does not have the comic moments of relief that the film has to alleviate the darkness of the story.

The Dressmaker is part historical fiction, part gothic fiction, part biographical, Ham being inspired by her mother’s life as a dressmaker in a small country town. It’s also a quintessentially Australian novel.

The town of Dungatar in which the story is set is fictional but if you’ve ever lived in a small country town, you’ll find many familiar aspects – there are some cute elements such as romance (but don’t think you’re getting a happy ending with this one) – however, the author focuses on the darker aspects of small-town life – you’ll find the suspicion and judgement that is born out of petty jealousy, ignorance and gossip. Our protagonist becomes a victim of this.

Tilly has returned to her hometown from Paris where she trained as a dressmaker to take care of her mother, who is a little eccentric, to say the least. The locals shun her, still blaming her for the death of a boy who was bullying her when they were children. Tilly has no memory of anything happening, remembering only being sent away to boarding school by the mayor of the town and separated from her mother. Little does she know of the town’s darkness, the connections and lies being used for self-preservation by every member – she becomes a scapegoat for the failing and sins of the whole town.

There is so much I could say but I don’t want to spoil anything – so I’ll finish off by saying that this is a novel about how the judgemental disposition of a town leads to their downfall – which is quite satisfying, I have to admit – and how one woman gets her revenge for the crimes committed against her as a child.

I suppose the basic premise of the book is this – treat others with kindness, think before you judge, and be a decent human being because your words and actions have more strength than you know.